Benefits Buzz Members should not Swat Away! read more >

University of Kansas removes art after governor finds it disrespectful. Was this about public safety or political sensibilities? read more >

Professor at Taylor University has stepped down after accusations he kissed a former advisee and inappropriately touched other women. Many are frustrated that the university received ongoing complaints dating back 14 years and found some of them valid, but never removed him. read more >

Led by Senate candidate Joey Gibson, many Patriot Prayer demonstrations have devolved into troubling violence as the group attracts a growing number of alt-right figures and members of the Proud Boys fraternity. read more > 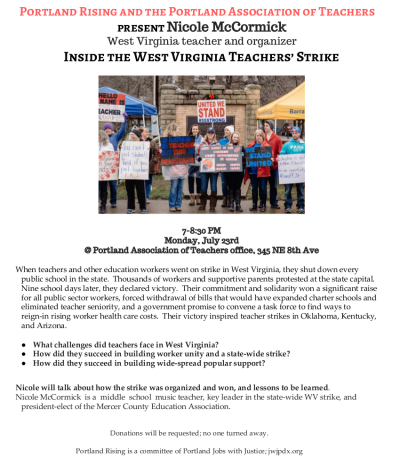 Portland Rising, a committee of Portland Jobs with Justice, and the Portland Association of Teachers are excited to announce a special talk on July 23, by Nicole McCormick, a West Virginia teacher and one of the leaders of the state-wide West Virginia teachers’ strike that took place in February of 2018. read more >

Speech First has ties to the billionaire Koch brothers and high-profile conservative causes. But the campus culture wars won’t be won in the courts: You can’t litigate students into changing their minds. read more >

Now the Janus decision has helped push the National Right to Work Committee and its sister organizations closer to that goal. read more >

The Use of Deadly Force and Civil Society read more >