April 30, 2021 - For the past several weeks we have been gathering PSU-AAUP member input regarding our imminent return to work. Hearing from many members via the survey and via email, we see that membership supports mandated vaccination for all PSU students and employees. As such, PSU-AAUP is asking Administration to develop a policy requiring vaccination for PSU students and employees. This, coupled with rigorous contact tracing, testing, isolation practices of exposed and COVID-19 positive individuals, and a plan for dealing with outbreaks that includes the ability to return to remote work, are the best ways to keep the PSU community healthy and on the right track for a return to campus. These efforts have proven effective at reducing the spread of disease at colleges and universities that have remained open during the pandemic.

While PSU Administration has launched its Open for Fall Open for All campaign, they have gone on the record that they would not require vaccines for students or university employees. Ironically, that same Willamette Week article quotes Oregon Governor Kate Brown urging vaccine requirements at Oregon’s higher education institutions:

Both the California State and University of California systems are requiring vaccinations for students and employees prior to returning to campus. Additionally, many local and regional private institutions, namely Lewis & Clark, University of Portland, and Willamette University, have also announced vaccine requirements. This sets a precedent in both public and private higher education institutions to follow scientifically-proven efforts (vaccines) for preventing infection, death, and reaching herd immunity so that we can stop the rapid spread of this disease. New strains and variants circulating in Oregon further strengthen the argument: we need PSU Administration to develop a vaccine requirement policy.

So what did our survey find? Read on for more detailed results.

As of Thursday, April 29th, the survey had 511 responses -- half of our membership, a very good survey response rate. Approximately 80% of respondents are concerned about their own health when the time comes to return to on-campus work in the fall, with 25% very concerned (Fig 1). 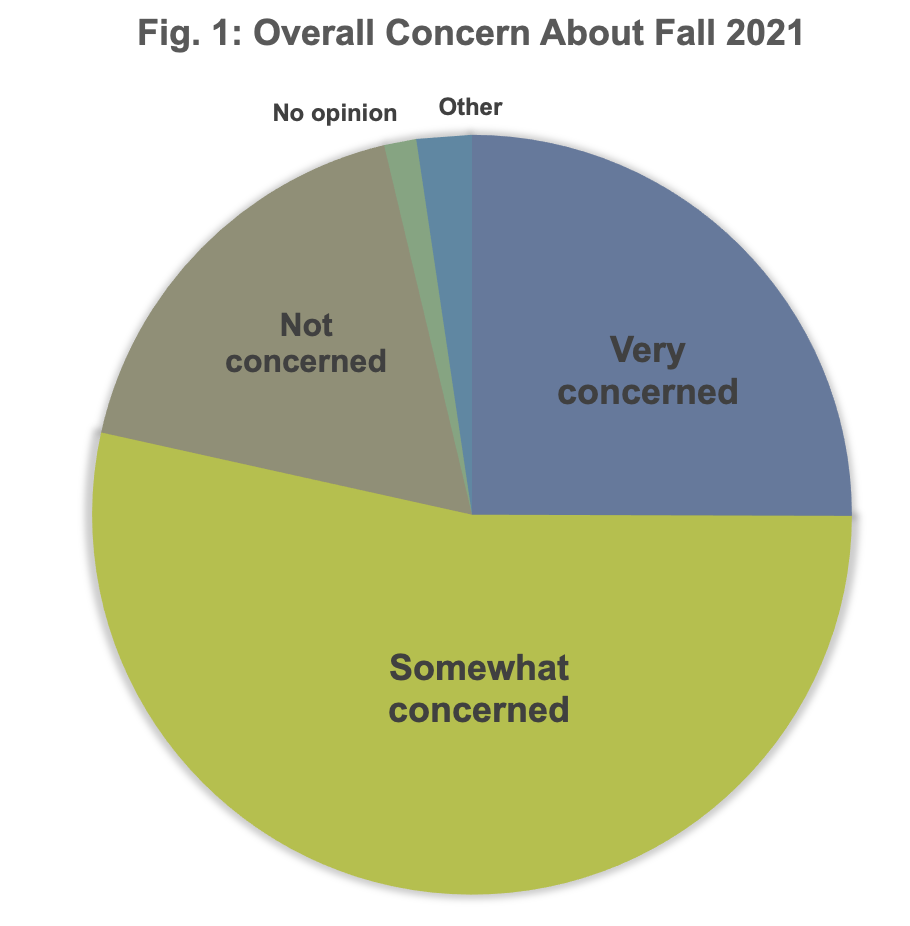 AAUP members remain concerned even though over 80% also believe that everyone in the Pacific Northwest who wants a COVID-19 vaccine will likely have received one by Fall 2021.

To ascertain what might be the cause of such concern, we asked how safe respondents would feel under different circumstances when it comes to the spread of the coronavirus and the efforts put in place to mitigate it (Fig 2). If PSU requires that all faculty, staff, and students be vaccinated, over 60 percent will feel very safe returning to on-campus work. On the other hand, if PSU does not require vaccinations but instead implements other mitigation measures like requiring masks and social distancing, only 11%will feel very safe and 44%will not feel safe (fourth asparagus green bars in the clusters). 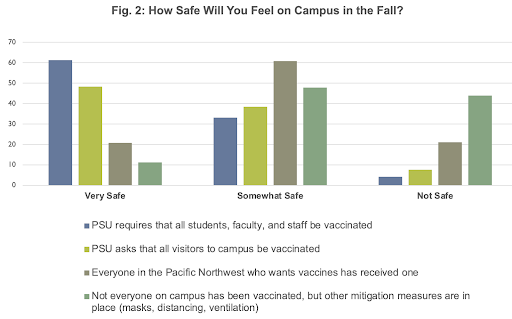 In addition to the quantitative data gathered, qualitative data highlighted concerns regarding caregiving duties; the more equitable work environment that remote work unintentionally made for members with hidden disabilities; and the precautions the university has (or has not) made to improve airflow, traffic flow, mask wearing enforcement, cramped classrooms, and more. Even if most people at PSU were vaccinated, members are also concerned that being forced to use public transportation, because they cannot afford campus parking or do not own vehicles, would put them at undue risk for exposure to COVID-19. Moreover, 46% of those responding to the survey said that they expect to use public transit to commute to campus in the fall, either regularly or occasionally, or might use public transit. Of these, 42% will not feel safe commuting (Fig. 3). 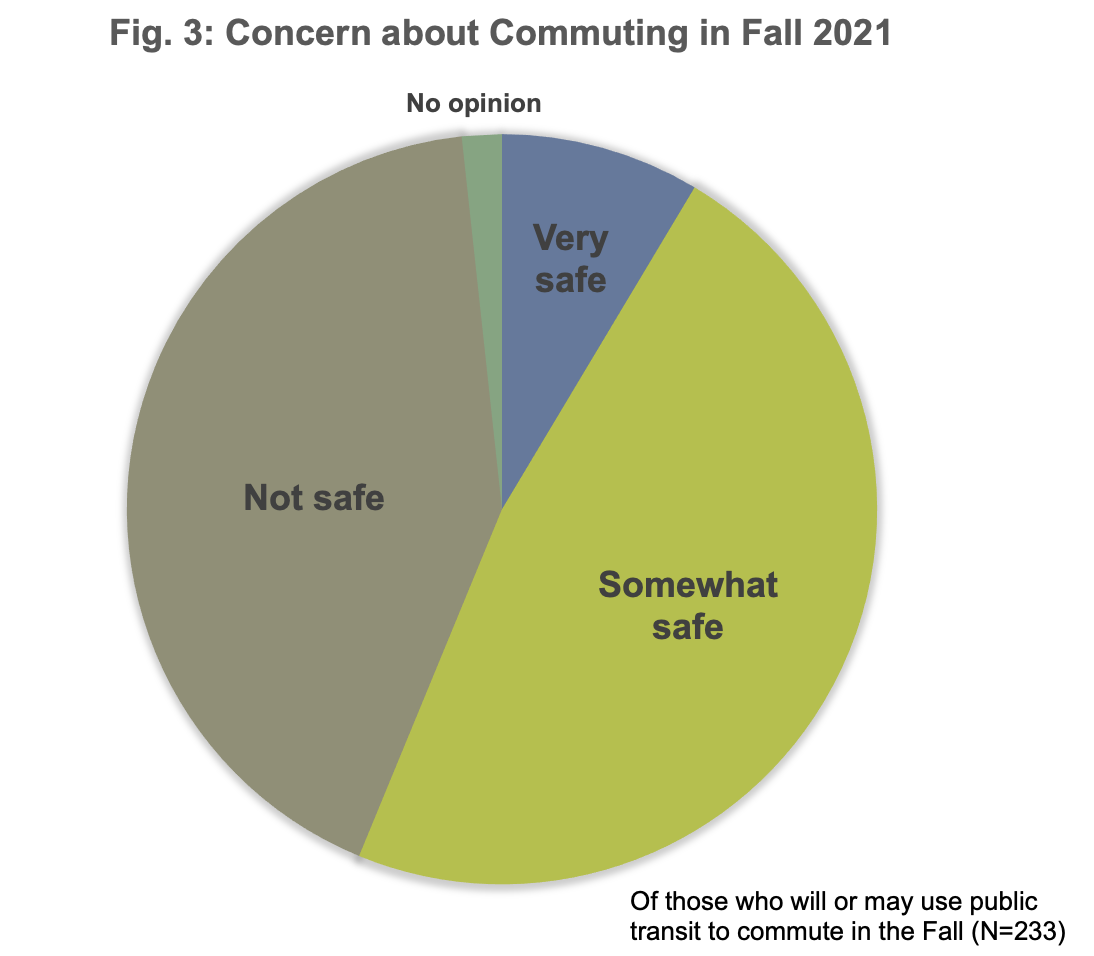 In short, the message is that a large portion of PSU-AAUP members responding to the survey feel unsafe and unsure about Open for Fall Open for All due to a variety of factors. While some, such as public transit, are beyond PSU’s control, the major concern, vaccinations, can be addressed, and indeed have been addressed by peer and local institutions. In addition to a vaccine requirement, membership asks for continued remote work abilities during the pandemic and after. Having proven that remote work is entirely practical, this can address work equity issues as well as those individuals with legitimate medical concerns surrounding vaccines and infection.

Where have all the physicists gone? A Report on the demise of Summer Session budgets at PSU

As a result of administrative changes in Summer Session budgeting, fewer classes are being offered during Summer Term, and some faculty have experienced deep pay cuts.  In 2013, smaller summer session budgets resulted in a rash of class cancellations, more than seventy in total.  In 2014, large-scale class cancellations were avoided, but fewer classes were offered, and faculty in some departments were paid significantly less to teach.  Many faculty who did teach in summer 2014 were surprised to be offered a flat fee that no way reflected their standard rate of pay, a radical change from past practice.  Pay cuts hit the most experienced, tenure-line faculty the hardest.  Some of the largest overall cuts occurred in the College of Race, Gender and Nations and in various science departments.

Especially hurt by cancelled classes, some of which were completely full, were PSU students. Many of PSU’s working students and student parents have to take classes throughout the year to fit their budgets, or take classes that are prerequisites for programs they plan to enter in fall. Others return home from other institutions and pick up a summer class or two while working a summer job.   Smaller budget allocations mean that departments are no longer offering a full array of courses making it difficult for many PSU students to get the classes they need to graduate on time.

Summer Session is a long-standing tradition at PSU, sometimes called “our once award winning program” of the university. While Summer Session is not a part of the AAUP contract, union officials will be looking at ways to help PSU administrators better understand the real impact of Summer Session cuts so that faculty and students are not left in the lurch in the future.

How PSU Prioritizes it's Money

In a study based commissioned by the PSU-AAUP, using data provided by PSU’s HR Department to the PSU Library, staff from the Center for Labor Research and Studies at FIU found sharply divergent trends for investments in administrative positions and salaries vs. faculty positions and salaries over the past ten years.

The number of Executive Administrators at the level of Asst. Dean and above grew by 65% over the past decade, from 31 to 51.

Over the same period, the already high student/full-time faculty ratio worsened, and faculty salaries lagged, even falling for some categories.

Between 2002 and 2012, after adjusting for inflation, on average