After many months of hard bargaining, and crucial agitation by AAUP members, the PSU-AAUP collective bargaining team has now concluded a tentative agreement on economic issues with the PSU Administration team.

As discussed in bargaining FAQs (9/20/22) and in the recent Q&A sessions with bargaining team members, the AAUP used an equity lens when designing cost-of-living proposals for this bargaining round. In an inflationary period, those with lower incomes are hit much harder given that they spend a far greater share of their household income on core needs such as fuel, food, utilities, housing, and transportation. Almost one-quarter of AAUP bargaining unit members earn less than $60,000 a year; and 58% earn less than $80,000. Inflation has hit these members particularly hard. Cost-of-living increases that emphasize higher percentages on the lower end of the income scale are one of the best ways in the short term to address these inequities.

Under this “graduated COLA” approach, the exact percentage increase to each member’s salary would depend on their total annual salary – expressed as a full-time equivalent (FTE) for those working less than full-time – and range from 8.0% for salaries up to $60,000 per year, to about 2.5% for salaries above $200,000 per year. The median salary - about $77,000 - would increase by 6.7%.

What will my cost-of-living increase be in January/February 2023?

Based on your annual salary, you can see your total percentage COLA increase on this chart. 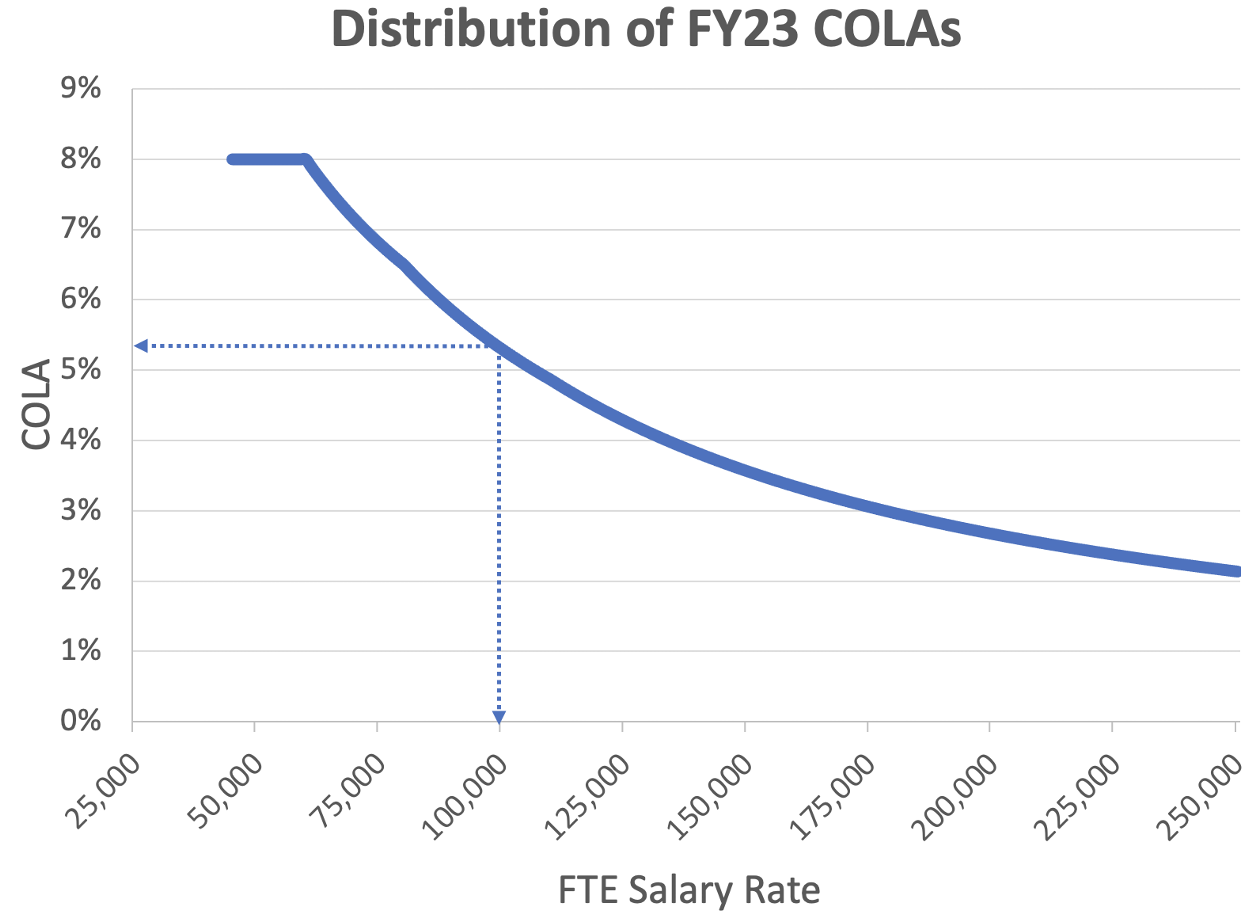 You can also compute your exact COLA, by percentage and in dollars, by using this salary calculator. (Click to download the Excel file - then you can enter your individual data).

Fiscal Year 2024. For the fourth year of the current contract, the tentative agreement would return to using a flat-rate COLA indexed to the inflation rate. The year-over-year inflation rate would be based on the Consumer Price Index for All Urban Consumers for the West Region (CPI-U West), as of October 2023. There would be a floor and a ceiling: FY 2024 COLAs would be no less than 1.75% and no more than 3.5%. The Congressional Budget Office, in its July 2022 Long-Term Budget Outlook, forecasts an inflation rate of 3.1% for the calendar year 2024, which would fall between this floor and ceiling.

The salary calculator (noted above) will also show your FY 2024 percentage and dollar increase, and the total increase over the remaining two years of the current contract. You can also read your total dollar increase from this chart, which assumes 3.1% COLA in FY 2024. 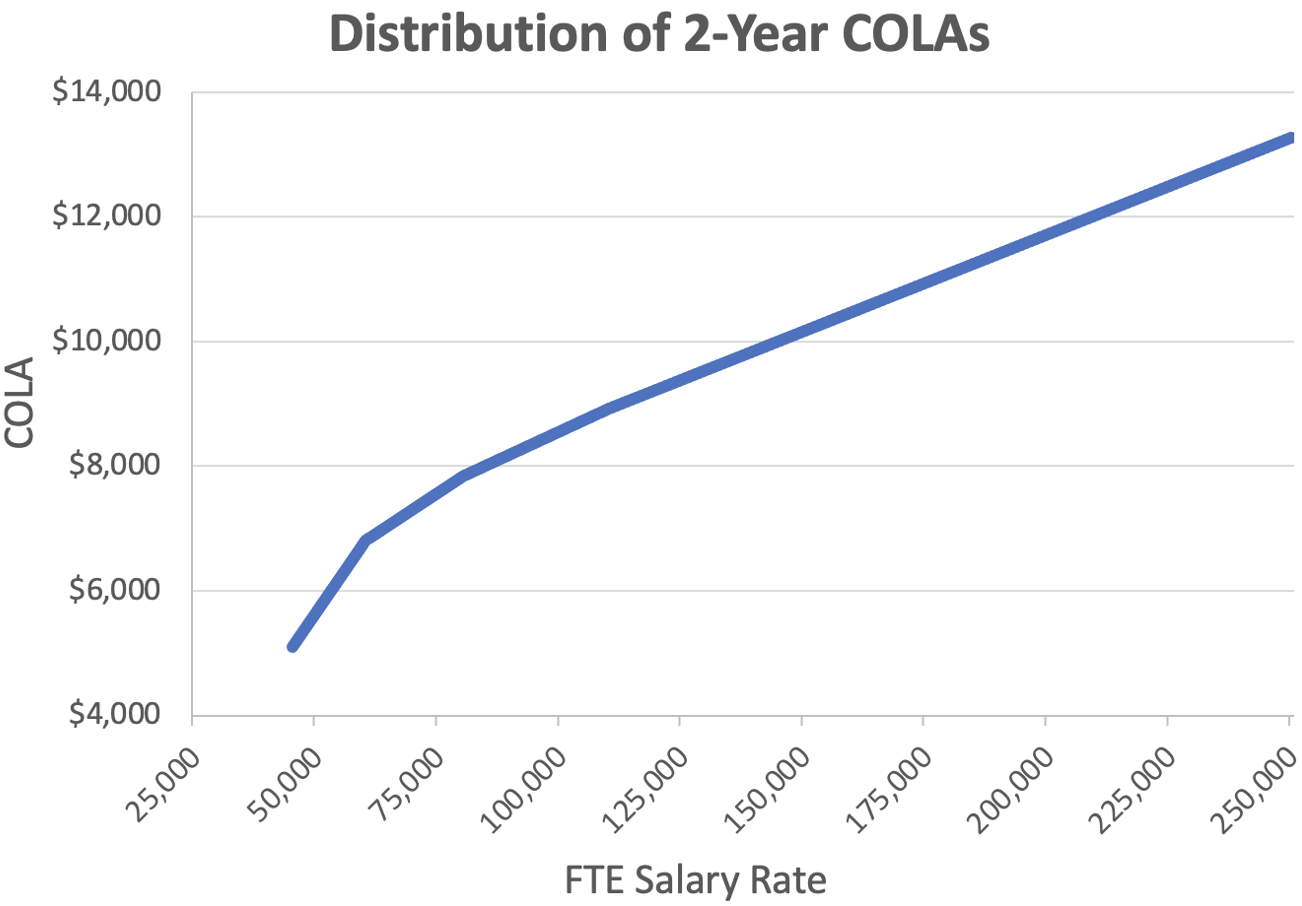 Note: For members who receive other salary increases in FY 2023 (e.g., promotion, professional advancement, post-tenure or post-continuous appointment reviews, etc.), FY 2024 COLAs will be somewhat higher than what the above chart shows because COLAs are calculated after those increases have been applied to base salaries, which usually happens in July (for 12-month employees) or September (for 9-month employees) of the fiscal year.

The transition of APs to new job families and individual contributor (IC) levels requires negotiation of new salary minimums and maximums, and the TA on economics allocates 1.0% of total AP annual salary rates for the purpose of bringing AP salaries up to at least the new minimums.

The process for doing so has not been finalized in negotiations yet, but we’re very close. It will likely proceed as follows. First, any salary below the new minimum for that job family and IC level will be increased to the new minimum. These adjustments will require allocating a portion of the 1.0% pool.

The remainder of the pool will then be used for the second step: a “retention increase” to bring salaries above the lowest IC-level minimums. This second step will increase salaries of current employees to $51,780 without increasing the minimums in the new salary table, which would remain the “hiring minimums.”

AP salary increases to or above the new minimums will become effective on January 1 and will be applied before the FY 2023 COLA. After COLAs are applied, no AP who is currently employed at PSU will earn less than $55,900 per year. New hires may be paid less, but the new salary table will be “aged” forward to January 1 by applying an increase of 4% to all IC salary bands, thereby increasing the lowest hiring minimum to $50,220.

The salary calculator (noted above) includes an option that allows APs to see the impact of these potential increases on their base pay as of January 2023.

Again, these figures are not finalized, but given recent progress at the table, they are likely. We hope to have a final agreement on the AP salary bands, new minimums, and implementation process by November 1.

When the current contract was signed in 2021, it included annual allocations of 0.8% of total tenure-track faculty and non-tenure-track faculty salary rates to address salary compression, inversion, and equity (CIE) through FY 2024. At the start of this economic bargain, the two sides agreed not to revisit these allocations for non-tenure track faculty and for tenure-track faculty. This topic was explored, however, for Academic Professionals. This tentative agreement would now establish a parallel fund, equal to 0.8% of total annual salary rates, to begin to address internal and external (market) inequities among academic professionals’ salaries.

The model used for distributing faculty CIE increases is unlikely to work for APs because of the dearth of comparable market data, so a different model will be developed through additional negotiations (already underway). The tentative agreement mandates that, whatever model is developed, targeted equity increases must become effective on July 1, 2023 for 12-month employees and September 16, 2023 for 9-month employees. These coming CIE increases do not impact the other increases that the contract already provides, for advancement within and between IC levels.

The collective bargaining agreement would now include a new article entitled “Caregiver Support.” These funds will be used for two purposes.

Funding levels for IPDAs will remain unchanged for this contract (through November 2024). This tentative agreement adds new language that would explicitly permit the expenditure of IPDAs funds on equipment and activities that were not previously allowed or which were not authorized by supervisors uniformly across campus.

These new items include:

During this bargaining round, the Admin and PSU-AAUP bargaining teams had extended conversations around parking and transportation issues. In those conversations, we reviewed options for reduced-cost TriMet passes, more options and more flexibility for parking passes, safety in PSU parking structures, and participation in the TriMet universal pass program.

We were unable to agree on these items, but extended conversations resulted in some forward movement. Under this tentative agreement, a joint task force would be created to continue these conversations and push for solutions.

The AAUP Executive Council will appoint AAUP representatives to this task force. The AAUP bargaining team is hopeful that the task force's work can be completed by the end of this calendar year, with any new benefits to becoming effective at some point in 2023.